The competition ends. The kids are sad at saying goodbye

Today was the grand final day.

Everyone had to be at the hall at 1030 am to get ready for the proceedings.

The hall was set up with just the main court and chairs around the court for the spectators.

After getting coffee for the organisers, I set up my viewing point at the upper floor galley to get a good view.

Yes, I have been making a coffee run for the organisers who are all great volunteers and who do not ask for much. So, I try to grab a few coffees when I reach the court and let them fight it out as to who gets what. Hey, I only have 1 pair of hands and can only carry so many coffees.

We are thankful for what the organisers do for the competition. They organise the hall, ready for the games even before any one arrives. Everything works like clock work and Badminton WA should be proud of how they managed this competition.


The order of event is for the plate events to be played. The girls plate was won by Janet Son, a dimunitive little girl from NSW.

The main event then took place which was a final between Grace from Queensland and Joy Lai. Grace is seeded 2 and Joy seeded 1. The results spoke for themselves with Joy beating Grace in 3 sets at 14-21 21-11 and 21-18. It was a close fight. Grace played admirably but could not finish off the game although she won the first set.

The next game was the plate between WA's Dennis Zhao and Justin Lee from NSW. This was again a 3 setter with the first  set at 23-21 to Dennis. The score does not show that Dennis came back from behind to win. The 2nd set was won by Justin at 16-21. Coach Paul asked Dennis if he felt tired at the break. For the first time, Dennis said "No". You could see the determination in his eyes. He proceeded to finish the game 21-12 as Justin had lost all his energy. Dennis has improved so much as a player. And I am told his studies are also great. He has great prospects both as a player and as a student.

The next game was the main game between Austin Yu seeded 1 and WA's Amos Yi seeded 2. Amos had lost to Austin in 2 sets for the team event. His parents were keeping their hopes high that Amos could turn that around for the individual event. The game started well and Amos got ahead before both boys suddenly found themselves in a deuce position. The lead changed a few times and Amos' dad and mum had their hearts skip a few times too. Austin finally finished the game at 25-23. It was so close and Amos had a couple of match points but could not convert.

Well, it was up to Amos to see if he could equalise on the 2nd set. He started well but then again found himself trailing at the 11 point break. He caught up a few times but could not close the gap before losing at 21-19. That was the end of the campaign for Amos with a silver medal for his efforts. I am sure he wanted a gold and he will have to work harder the next time to get it. His parents know that he tried everything but this time, it was not his year. Even his sister was at the stand and you could see her heartbreak for her brother's loss.


The next plate event was the girl's doubles plate. Hera Jim and Lily Rigg beat Siobhan Dang and Mandy Li in 3 sets in another close fight.

The next event was the girl's double between WA's Eunice Lee and Phing Teo seeded 2 against Joy Lai and Grace Ngiam seeded 1. The no. 1 seeds were too strong and they won WA 21-19 and 21-10. This is Eunice's and Phing's first individual silver. Who knows,  the next one may be gold. However, there is lots of hard work ahead. Are they ready for it?

The boy's doubles plate was between Sagar Kumar and Ewaldo v Benjamin Han and Mark Moriaty. Sagar and Ewaldo were too strong finishing the match in 2 sets.

The mixed double's  plate event was between Eric Qi and Adriana Phan against John Taing and Tylah Bruhn. Eric and Adriana won in 2 straight sets.

The final game was the mixed doubles between Andre Zopf and Joy Lai the no. 1 seed. Julian Lam and Grace Ngiam the 2nd seeds were the opponent. Remembering my son Tyz and Sanoja had just lost to the 1st seed in 3 sets the day before, I wondered what the standard of the finals would be. It proved an exciting 3 setter which dinged donged between the 2 opponents so many times I am glad they are not my children.  Andre Zopf and Joy Lai finally won the 3rd set at 21-19 although they lost the 1st set.

The winners are listed below and I was pleased to see Tyz and Sanoja had been recorded as 3/4 winners despite not having played together before this competition.


That was the end of the matches. The floor was then taken by the MC.

One of our keenest and most qualified umpire Greg Vellacourt (a fellow lawyer) was honoured for his work as a referee. He well deserves the recognition and was in fact my tutor when I did the umpire course myself with my wife.


At the end of the carnival, the players ranking for the tournament was announced. Amos from WA was ranked 2nd after Austin Yu. Edward Fan of WA was ranked 6 even though he is a regional player. He did well in the individual event by beating one of the seeded players.

This has been a good year for WA. Again we have to thank all the coaches who have assisted the players.

The team has made history by winning a bronze medal. There has been 2 silver medals won by the team with Dennis winning the plate. It bodes well for the future of WA badminton.

After the competition, the kids are allowed to let down their hair. This year, a night out at the Warwick Bowling alley was organised. The children had some light snacks before having  their bowling games. You can feel the teenage hormones with the girls screaming and running all over the place and the boys playing it cool.


The parents are also able to socialise for once without worrying about training, feeding the kids etc.  At the end, the players have a hard time saying good bye to their new found friends. Some tears are shed. Facebooks will be updated. 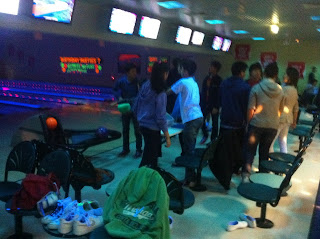 So that is the end of another Under 15s competition. 6 days of intensive badminton with the players giving their best. Parent's feeling every feeling under the sun and moon.

If you ask the kids if they will do it again next year. They all shout "YES".


They do not have to worry about their parents having to continue ferrying them to and from training. They do not think about the hard work preparing the logistics for taking part including food, accommodation, transport etc (including dealing with some parents that are less than agreeable).


I am not even mentioning the coaching fees.


If you ask the parents if they would support their children if they want to take part  again next year, I bet the answer will also be "YES". All because we love our children and we want them to achieve as much as they can in their life.

Sports at a competitive level, even if it is just at a National level is a commitment. I can imagine if some of these kids are picked to play for Australia. A few of them have and the commitment is even higher. One of WA's top player used to have to fly every weekend to the Eastern States to train. To balance life, studies and their sports is an amazing feat which will well help them when they are adults.


The friendships they have forged with their fellow players will always be treasured.


I was most touched when I was speaking to Mark Duxbury, the organiser and chair for this competition. We were looking at the digital photos taken  by the professional photographer. Amos was looking to see what photos they had of him and there were quite a few good shots. Mark said to Amos that he should buy the photos as they would comprise of some of his best memories when he gets older. I did not expect such sentimentality from Mark, who at the best of times always appears gruff and upset at the players. :) Just joking Mark.


Any way I do agree with Mark. These are going to make up the best memories of the players' youth. So to all you players, do enjoy yourself reading this blog when you are older.


As for me, I think I may now have to start an Under 17s Blog page as that seems to be where my boys are heading next. Good night for the year.


Comments from a friend

What a nerve wrecking day it must have really been! I can literally feel the adrenalin rushing from the players and especially you parents under such intense pressure and high dramas!!

I am completely overwhelmed by such display of determination and fighting spirits from these young players and the vociferous display of support from you parents and well-wishers urging them on. Wish I was there to witness this event.

For those kids who did not manage to advance further in the tournament, they can be very proud of themselves for having fought so gallantly. And for those who are still in the running, I wish them all the best!!