Memories of the Under 15s tournaments that I have blogged about and been personally involved in.

Was just going through the blog from 2012 to see what I had written before and what WA has achieved in this tournament.

The best we have won was a silver in 2012. I am hoping WA can do much better this year under Yuli's coaching.

For the players, I can not help but put in this picture of Xiang and Tyzton when they won BD silver in the Under 15s.

Xiang was so short.


How cute and short Xiang was in 2012. Despite giving their best Xiang and Tyz only managed a silver.

Fast forward to 2016 and they win the Under 19's Doubles gold. See how Xiang is now taller than Tyzton. 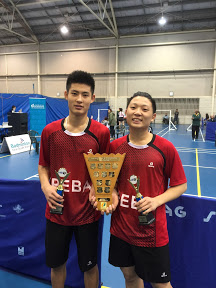 So, never give up. You never know where your talent and determination will lead you.

Of course Xiang went on to win many gold medals including triple crowning in the 2013 Under 15s.

He also double crowned in the Under 19s last year and the year before.

So players, give your best for WA and good luck.
Posted by Raymond Tan at 10:43 AM