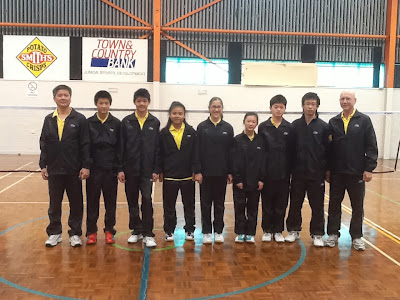 I was hoping that I was able to hand over the Under 15s blog to a new parent whose child is in the 2013 team. Alas, it is yet to happen.

I do feel the responsibility to blog about what has been happening.

From my interviews, I know that this Under 15s nominations saw the most number of players nominate. There were 6 boys and 6 girls that nominated for 3 boy positions and 3 girl positions.

The selectors had a tough time but finally decided on:

Xiang was ranked 3rd last year in the  Under 15s event. I expect that Kai Chen and Jasper have a good chance of being ranked too this year.

Xiang is looking to be ranked No. 1. He has been working hard.

As far as the girls are concerned . I think Geri May has a good chance of getting a ranking.

The other 2 girls are also taking part in their first national event. It will be such a lesson. They will learn so much.

For parents who are new to state teams, they need to read a bit more of the old blogs to find out what is a ranking, what is a seeding, how the team events are organised etc.

I am hoping the team will be able to get a team medal.

The manager is Sok Teoh. He is great for the job as his heart is in badminton.

The coach is supposed to be Eric while in Perth with Bradford's dad as the coach when in the comp. I do not know how that will work.

Sok Teoh has suggested getting his son Kai Jieh as the asst coach. It is a good idea but it depends on what the BAWA board thinks. I support the idea and hope BAWA sees so too. The poor guy is supposed to be manager and coach and fund raiser? Give him a break.

The heartache story was of Ryan Courtie not making the team after giving up a spot in his table tennis state team. To his credit, he returned to the Elite squad training last Thursday. We will see great things from Ryan, I am sure.

He went on to represent Australia in the Junior category.

I know that the road ahead for the manager is going to be difficult.

I am still trying to find out who will blog?  Am I still the blogger? I guess if there is no alternative, I can fill the role and give updates as best as I can.


I also recently received more information regarding the High Performance team that has been training under YuLi Xheng.

The High Performance Team is managed by Annie Sim. They train prospective champions that will represent Western Australia. The team has been training for over 2 mths.

YuLi is no newcomer to the BAWA scene. She has been running her own academy called An-Yu Badminton Academy. She has also been coaching the State's Under 17s team for the last 2 competitions.

Info on the academy can be found at http://an-yubadminton.blogspot.com.au/

Zheng Yuli (Chinese: 郑昱鲤) is a retired female badminton player from China.
She earned a bronze medal as a semifinalist at both the 1985 IBF World Championships and 1987 IBF World Championships in women's singles, dropping three set matches in each case to her compatriots Han Aiping and Li Lingwei respectively.
She won the women's singles at the Japan Open in 1984 and at the Denmark Open in 1984 and 1986. Zheng played on Uber Cup (women's international) championship teams for China in 1986 and 1988.

With that kind of pedigree, I am sure the players in the High Performance team will do well. As testament to YuLi's great work, these are recent results from the State championship.

Till I blog again, good night.