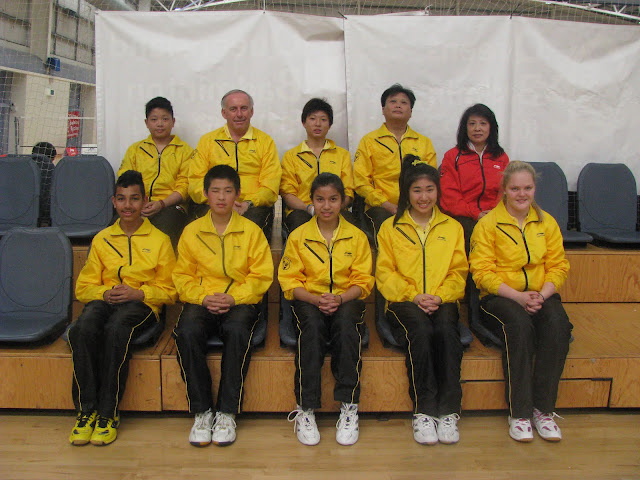 
The day started with me waking up to laughter from the pool at 630 am. What the?

I looked out and saw the following:

It has been an interesting start to the day. Kim and I raised several concerns regarding the condition of the courts. The lines do not meet the guidelines as the lines are broken at numerous places. Attempts to get the organisers to change the lines were to no avail.

We also had some concerns about the overhanging basketball hoops on the sides of 2 courts. It was not a good start to the morning. 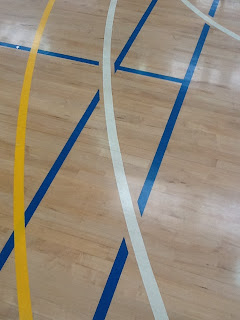 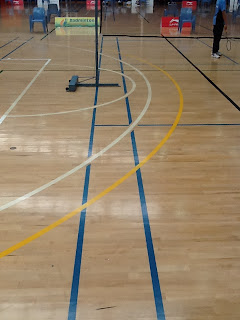 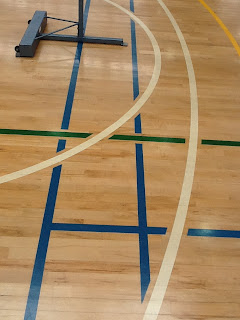 The day started with a training session in the morning before the opening ceremony.

He wanted to direct where my team sits for the photo but I did not want to have any of that. He finally relented after I stood my grounds to his quip that he was running the show.

Just another concern as to how the show is being conducted compared to BAWA's method of  operation. It makes us so appreciative of BAWA's committee and volunteers. Go Judy , the BAWA board, the volunteers and supporters.

We brought everyone back for lunch which was freshly baked quiche made by Tonia. The kids love it and so did I.

We made sure we returned to the court early to warm up properly for the match.

The players had their first tournament team hug and cheer. All the practice paid off as their cheer resounded through the whole hall and caught everyone's attention.

The game is about to start. I hope I can do my work as a blogger and manager.

The first game is between Tyzton and Xiang v Schueler and David Kang.  Olivia and Alex are playing Joy Lai and Lily Rigg.

This should be interesting. Kim and I have had numerous discussions late into the night deciding on the strategy for the team placement. Opinions have shifted numerous times until this afternoon when the final player's list was given to the organisers.

Ernest Yam is playing Tyzton in the singles while Xiang is playing David Kang.

Teresa Chan will play Alex while Joy Lai will play Olivia. I have been psyching Olivia up for her match.

Schueler and Teresa will face off Xiang and Olivia while Lily and Ernest will play Tyzton and Alex.

Tyz and Xiang seem evenly matched against Vic. WA gets to 11 first.


WA girls are trailing Vic girls. They need to attack Lily more. They go down on the first set.

Xiang is next to play. Alex is playing the Vic 3rd girl.

Xiang wins the first set after some dodgy lining by the Vic linesboy. I went over to ask him to line properly and was subsequently warned by the referee? He said I was influencing the linesman.

Alex is leading in her game. Alex wins the first set but loses the 2nd set.

Alex loses the 3rd set at 12/21 after trying hard. She is upset and understandably so.

Olivia is struggling against Joy but she is fighting for every point for the team. She gets 17 points on the first set and 18 points on the 2nd. She nearly made it a 3 setter. She should be proud as she is catching up on Joy every time they meet.

At the moment we are drawn on games but are ahead on sets as far as I can tell. The mixed doubles are going to be crucial.

Tyz and Alex are starting their mixed doubles.  They are leading at 17/12. Vic gets 2 pts. in a row.  They then hit a high serve which Tyz smashes. They get to 19/15.  They get to match point after Vic serves to the net.  They win the first set after Vic hits out.

Tyz and Alex need to dig deep to get the 3rd.

Xiang and Olivia are going for a 3 setter too after losing the first set.

Olivia and Xiang have to win this game to get confident for their next game against NSW 2.

I have recently  been informed by Himanshu , BAWA's CEO that this is the first time in 15 years that WA beat Vic in an opening match or even possibly in any team events.


After the game , we were back at the wall as per Nick Kidd's instructions to captain of the team.


Word got round to WA very quickly of the victory and emails were flying all over.

The Under 15 team creates history and surprising everybody today at Caloundra during the Val Nesbitt Trophy 2012.

For the first time in over 15 years, WA team has gotten the better of Vic No 1 team in the first tie of the team event.

Congrats to the Coach, Manager and Players of the team.

Fantastic whow  first time DEFEATING the Vics for a long time what a great game in your last mixed with Xiang and Olivia...
Keep up the good play

Congrats to you all......well done WA

What a great match!
This is an excellent result-- congratulations to everyone-- including Heer and Sophie, who I am sure were cheering their friends every step of the way.

Sometimes the hard thing to do is to be just as fired up for the next match...  No match is going to be easy- and the hype has to be kept going.

Keep talking and supporting each other-- thinking clearly and staying calm.

Don't let the courts/lines/hoops etc become a distraction--  these things disadvantage everyone-- concentrate on what is important.

I am sending good vibes across to Queensland...

Enjoy the win and good luck with the next matches.
Jiten

Thank you for sharing with me this wonderful new!

As I scrolled down the lists saw all the familiar names of our WA wonder kids and the outstanding results they produced, my heart was full with great joy and tears just kept rolling down!  I don't know how Raymond can do without tears this time!  Haha! You are there! I bet you cried every match!
Judging from the score it looked like Tyzton and Xiang were having easy games while Olivia and Alex were having tough fights. I am very proud of the two girls as Alex lost in 3 sets while Olivia took 17 and 18 points from Joy Lai! These was their victories already considering how much training our kids have compared to the Victorian or Eastern States as a whole!  Very close fight for mixed doubles 1, Xiang and Olivia, must be overwhelming for all who watched!  Strangely Joy Lai only played 2 games. Is she injured again?
Please convey to our WA wonder kids that Aunty Touk Reei is very proud of them and like to remind them the words I shared with them in last year's under 15 tournament: that they can do well because they have the spirit of a roaring lion full with might and power! They also have a unite heart too so they will succeed!
All the best to WA team! Keep up the good works!
Best regards,
Touk Reei   (Amos Yi's mum, another mad badminton parent supporter)