Our 2nd day at Caloundra


I got up at 6 30 am this morning. I do not usually wake up this early as I am a late sleeper. Last night was exceptional as I went to bed at 11 pm when my usual hrs of sleep are 2 am.

Anyway, I was the first one up in the apartment. I decided to cook chicken porridge for everyone and a vegetarian version for Heer.

After breakfast, the team got ready  to go back to Nambour for training.


As we were early, Kim decided to give us a tour of Caloundra. It is actually bigger than Mandurah. It also has a canal resort village with lots of beautiful homes.

We ended up at Dicky Beach for photos although it was quite cold.

The players worked hard and as usual at the end of the training, Tyzton got the team to do a cool down. The cool down involves leaning against the wall with the legs hanging up to get the lactic acid out of the system. 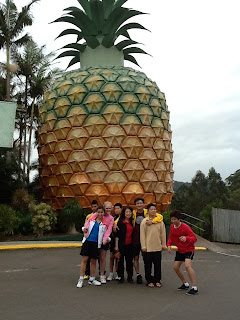 After the Big Pineapple, we had a chance to try out the courts at Caloundra finally. The floors are good but the lines are confusing. Kim had some words with the tournament referee and is still trying to find out whether any changes will be made.

After the training, the players were treated to Cold Rock ice cream which I later discovered cost $51/ for 6 players!!!! This has blown the budget sky high. Kim said there is to be no more ice cream till they win.

We had dinner prepared by the coach, the manager, the umpire and Tonia. We had to get Kim to help at the kitchen after Judy's comments that his job was too easy. The kids finished dinner quickly and enjoyed every bit.

Annie is cooking tomorrow's dinner which is lasagne. She just set off the fire alarm. Oh dear, this has been an eventful day.